Embed this campaign on your site...

Help raise awareness by sharing this widget. Simply paste the following HTML code most places on the web.

Organizations that produce films, videos and holographic images for a variety of educational, documentary and cultural purposes, and/or promote public appreciation of film and video. Also included are organizations that encourage new, foreign and independent filmmakers through the organization and presentation of film expositions and festivals or which show old or difficult to obtain films in noncommercial facilities.

WHY IS THE FILM ENTITLED, WITH ONE TIED HAND? 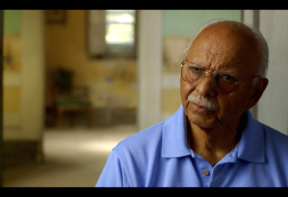 Though American veterans have freed and continue to free people worldwide at immense sacrifice, a little told American story is the unique liberation of the Tuscan people by the Buffalo Soldiers of WWII who nevertheless returned home to a 'Jim Crow' America. The filmmakers intent is to bring this story to life in With One Tied Hand, from the nonprofit Pacific Film Foundation.

The film's wounded hero, Ivan J. Houston, served in the Segregated 92nd Infantry Division that fought against the German Army and Italian Fascists defending The Gothic Line. The Black soldiers also had to deal with the U.S. Army’s institutionalized racism, fomented by General Edward Almond, their racist commander (a fact acknowledged by the U.S. War College).

“That was just the way the Army was,” says Mr. Houston, retired CEO of a major life insurance company. An original poem by Mr. Houston reveals that the Buffalo Soldiers fought (and died) "with one tied hand."

WHAT IS THE STORY ABOUT? 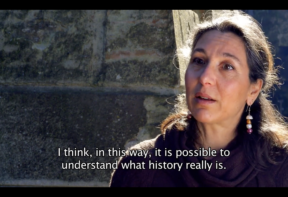 The story illuminates the Italian viewpoint. Tuscans, impoverished and starving in WWII, feel they owe their lives and freedom today to the Buffalo Soldiers, whom they have lovingly dubbed 'Giganti Buoni' (Good Giants). An Italian eyewitness told the filmmakers, “They came down the mountain and freed us, and took care of us.”

When he returns to Italy, Mr. Houston feels warmth and respect. Through the hospitality of an Italian woman, Mattea Piazzesi, a unique bond is formed between two families. Ms Piazzesi had discovered Mr. Houston's book, Black Warriors; The Buffalo Soldiers of WW II.

Tuscan gratitude is shown to Mr. Houston, with parades and celebrations featuring Buffalo Soldier Reenactors throughout Tuscany. He also hears moving personal stories from surviving eyewitnesses and their families.

WHAT ARE AUDIENCES SAYING ABOUT THE FILM? 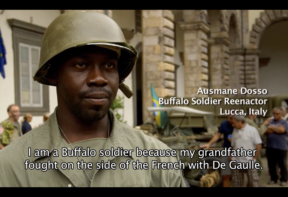 Global audiences respond when they witness these segregated Buffalo Soldiers fighting and laying down their lives for the freedom of the Tuscan people. The Black soldiers could identify with the poor, starving Italians, who somehow knew these downtrodden American soldiers had come halfway around the world willing to be of service.

Viewers also love the faithful reenactors, who portray the Buffalo Soldiers every year as they celebrate the Liberation of Lucca, the 500-year-old medieval walled city in Tuscany. Mr. Houston rode in the lead jeep (a lovingly restored 1940 vehicle that runs like a top!)

REVIEWS OF WITH ONE TIED HAND

“Congratulations. With One Tied Hand is completely transformed from the cut you showed me in October, last year. It was definitely worth working on more to get the best out of the material you shot. I think the film works well now. As your story consultant, I'm happy to give the film my blessing. I think your film would be ideal for PBS. (Mark Jonathan Harris, 3-Time Oscar Winner)

“I want to tell you how much I enjoyed With One Tied Hand. It is such a great tribute to all of our Black soldiers who fought in WWII. It is such a "Heart Warming” film describing Death, Destruction, and Discrimination. It fully captures the Horrors of those years with little Venom. The kindness and respect there was (and is) between the U.S. Forces and the Italians who were trapped in their Villages is very "Special." It made me very “Proud" and "Sad" at the same time. Keep me apprised of what is next for the proposed WWI Documentary.” (Last Surviving Relative of General John J. "Black Jack" Pershing)

“We watched With One Tied Hand and thought it was great.  Loved the intertwining of how they fought and liberated the Italians and yet were not truly liberated themselves at that point.  The surviving Buffalo Soldiers who were featured were wonderful spokespeople and gave the film an authenticity and warmth that could not be transmitted by a disembodied narrator and film clips by themselves.  That older Italian who talked about receiving chocolate from the soldiers really gave it an emotional boost.  The extent to which the Italians remember what the soldiers did for them and how much they still are appreciated is a story that more people need to know.  In fact, I think you are doing a great service by bringing this story to film.  It's so relevant to our times, given America's continued struggle to overcome racism.” (Former Peace Corps Executive)

“I decided to hook the video up to the screen and have the entire office finish watching with me. That way we controlled distribution. I cried. Yes. I am a cry baby and the documentary is powerful.” (Film Producer)

“It was very saddening to learn the plight of the Buffalo Soldiers during the first half of the film. I cried throughout the final scenes. Great film.” (Filmmaker/Cameraman)

“Congratulations!  I finally had a chance to sit down and watch With One Tied Hand. A very moving tribute to the Buffalo Soldiers and Ivan Houston's legacy. I wish you the best of luck with this documentary.  It's an amazing story.” (KNBC Anchor Woman)

“Great job. I really enjoyed the dialog between Ivan & Andy in the restaurant. There were some very emotional scenes.” (Retired Healthcare Executive)

“I just viewed your wonderful inspirational film. How much it has evolved! I was so moved watching it. Shocking to hear Gen. Almond's document/comments on Black soldiers. Moving to hear the narrative of the man who remembers when he was 5 years old and saw the Buffalo Soldiers coming to save the area. I loved the work you did. It is a great service to Ivan who is beyond remarkable. I also enjoyed the scenes with his military peer at Pann's and loved the final dance with his new Italian ‘daughter.’ Kudos to your effort and product!” (English Professor)

“Congratulations. A magnificent accomplishment. There is so much there, so many moments. Beautiful. It is a wonderful tribute to the Buffalo Soldiers, to Ivan, to his family, and to the appreciative people in Italy. Passion and perseverance have won.” (Author and Public Relations Executive)

“We have now viewed With One Tied Hand, and consider it a privilege to have followed its (and YOUR) progress, all these months and years. What a fine achievement. We wish you success, wide distribution, awards, etc etc!” (Author (wife); Art Gallery Owner (husband)

“Ok. Where do I begin to tell you how amazing this film was. I am so happy to have been a very very very small part of it which I wish I could have done more. This film is on its way to great recognition and admiration by anyone who sees it. In my opinion you guys better hang onto your hats because it's going to be a great ride. I can see accolades and awards and stars and red carpets OK OK I'm getting a little over board here. In other words I really really really really did like it. No, I LOVED IT.” (Italian-American Chef)

“Thank you so much for sharing this beautiful, touching film. It is SO well done and so moving. All the hard work you and Joe have put into this has come to fruition, and we could not be more delighted or supportive. Are you now going to be showing it at festivals? We hope to see "Tied Hand" in wide release. Every American (and actually everyone everywhere) should know this amazing, heartwarming, hope-engendering story. The archival footage is incredibly impressive. Ivan Houston is an incredible treasure. You are fortunate to have gotten to know him, and I'm sure he and his family are indebted and grateful to you for bringing the story to light & helping cement the reconnection with the Italians he helped liberate. Thank you again! Kudos! (English as a Second Language Professor)

“Thanks for sending me the link to the Buffalo Soldier documentary. Very nicely done...the editing, content and research. It must have been a very gratifying experience as well a lot of fun putting the story together and working with all the people involved. The documentary has a very positive feel to it.” (Realtor/Broker)

“You guys did such beautiful work! I just watched it, and really loved it.” (Actress)

“The timing of his film is powerful with respect to the current state of race relations in the United States. It allows Non-African American viewers to connect and relate to individuals like Ivan and the rest of the Buffalo soldiers.” (U.S. Marine)

WHAT DO YOU WANT TO ACHIEVE ON FUNDDEED? 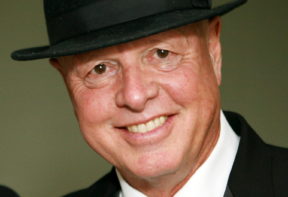 A few words from the film's director, Joe Hartnett...

We need $25,000 to make this film fully ready for a country that desperately needs its positive message of cross-cultural love and acceptance.

Our work will include tightening the film (cutting about 7 minutes per the notes from our Oscar-winning story consultant), making an improved sound mix of our wonderful score, paying music licensing fees to our composer, finessing final color corrections, funding attendance at film festivals, arranging special film screenings, and providing the highest quality film for wide distribution.

Please support our efforts to get this important project out to audiences by donating to the Pacific Film Foundation via FundDeed!

Every donor will receive a free streaming copy of With One Tied Hand, along with password access. Please donate today.

Our entire team thanks you!

Cancel reply
Step 1: Specify your contribution amount for With One Tied Hand