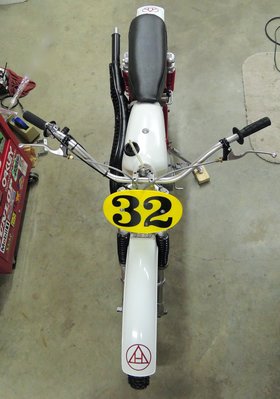 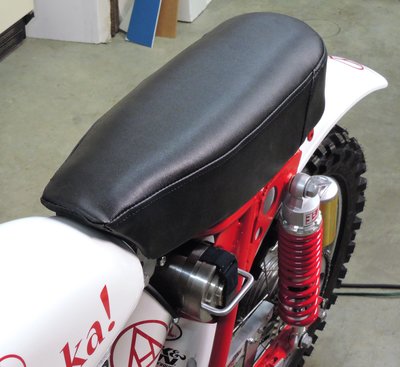 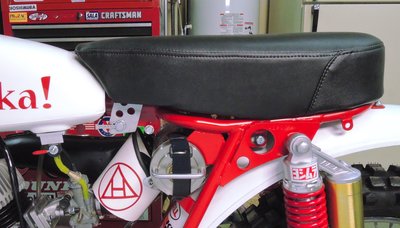 Finally, a completed seat assembly just bolted on. It seems to set fine and is pretty much as ordered. The lower 2/3 foam is much stiffer and the top 1/3 softer.

Engine is in, but I still haven’t started it yet so no trail time yet for seat testing yet. The kinky exhaust seems vulnerable to damage so I made a guard out of 1/4″ aluminum and gave it a “jeweling” effect – harder than it looks.

Being a photographer the next step is to photograph the bike in the studio before it gets dirty for the first time. Our local Dawg Daze Car and Bike show is not far away and I’ll also be taking it there. We probably should also shoot some action shots for things like the Resonator and such. I don’t want to end my fun thread yet and we probably need some tuning and evaluation reports on whether my engine and pipe mods actually work. We’ll see.

This actually started out as a low-key project to use up some existing parts and build something useable such as a trail or trials bike. Also as a motorcycle project, it entertains me and gives one a feeling of “well being” by having it in the shop. In the end almost everything was replaced except for the frame and swing arm. This is my fourth motorcycle restoration project that has gotten out of control but the rewards were great in that many enjoyable hours were spent and it did keep the old brain going! Putting everything from “Day One” was another benefit as I really enjoyed the process. All good!