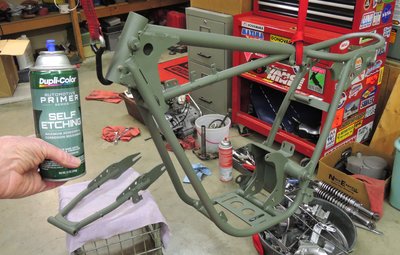 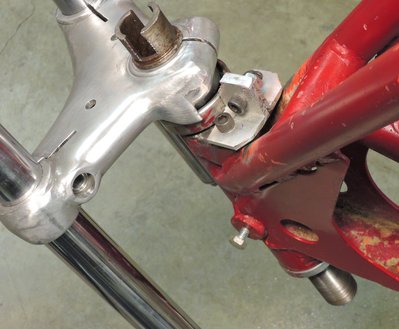 I was reviewing the photos and began to see what appeared to be some apparent severe corrosion and blistering of paint around the fork head. I began to poke around with a screw driver and discovered that the DPO had not gotten around to washing off the mud before his last paint job. All is well and sound but it just makes you wonder.

Even though the blast went well it looks as though there’s still a few places to work on manually and a small crack in the rear fender bracket that needs a weld.

Well, my wife is somewhat upset with me for spraying primer in the garage that shares the same central heating unit as the house. Hopefully she will get over it after I explain how important it is to get primer on freshly blasted metal. A friend of mine that has the local body shop recommended this etching primer on blasted metal. It does seem to really stick. 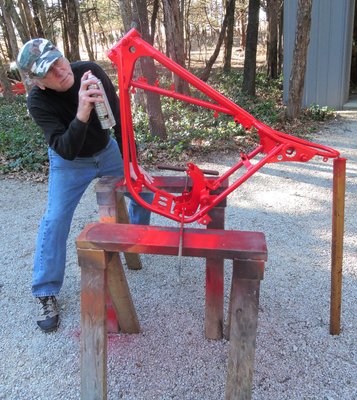 Wow, the thermometer hit 70 degrees F this afternoon—time to act. I did go with the Rust-Oleum Safety Red which sprayed good and was outrageous red as I desired. Two saw horses and a steel rod allowed me to rotisserie it quite well. (I did get into trouble once when I didn’t have enough hands and had to cell phone my wife in the house to hand me that board.) Anyway, mission accomplished for now!